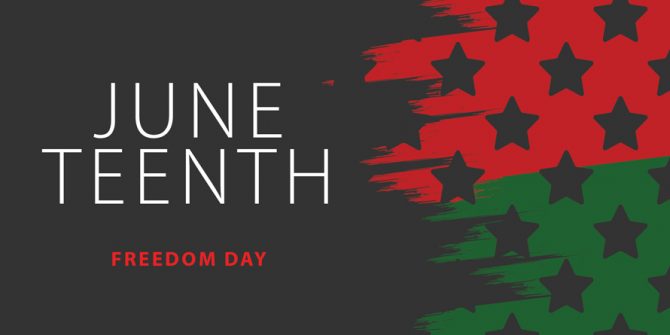 June 19 marks the anniversary of Juneteenth, the day in 1865 when enslaved people in Texas finally learned they were free, two years after the signing of the Emancipation Declaration.

"Even though the Emancipation Proclamation was made effective in 1863, it could not be implemented in places still under Confederate control. As a result, in the westernmost Confederate state of Texas, enslaved people would not be free until much later. Freedom finally came on June 19, 1865, when some 2,000 Union troops arrived in Galveston Bay, Texas. The army announced that the more than 250,000 enslaved black people in the state, were free by executive decree. This day came to be known as "Juneteenth," by the newly freed people in Texas." (nmaahc.si.edu, opens a new window)

Learn more about and celebrate Juneteenth with these programs, events, and booklists.