Port Townsend author Patrick Jennings is known for the many characters he creates and the humorous topics and styles he covers in his books for kids. 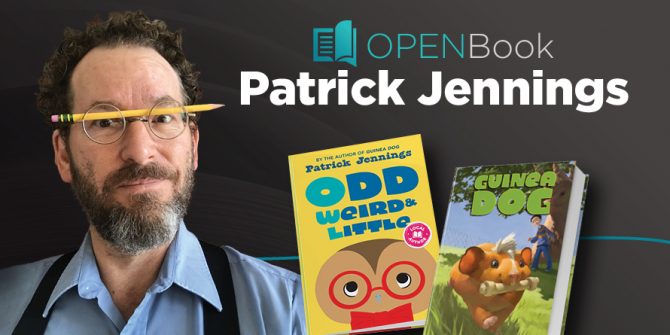 Jennings will read stories and share his creative process in the next Sno-Isle Libraries author series event for families, Open Book: Patrick Jennings. It is scheduled for 10 a.m. Saturday, Feb. 20.

Jennings landed on the children’s book scene in 1996 to critical acclaim with “Faith and the Electric Dogs.” Two dozen titles and series have followed, including “Guinea Dog,” “Lucky Cap,” “Invasion of the Dognappers,” “Out Standing in My Field,” “Hissy Fitz” and “My Homework Ate My Homework.” “Odd, Weird & Little” is one of the featured books in this year’s Sno-Isle Libraries Third Grade Reading Challenge.

He’s now working on a book about a boy who finds a goat that skateboards and wants to keep him as a pet.

Jennings grew up in a small town in Indiana and tried to get the nickname “Tiger” to stick without success. In his website biography, he refers to himself as Tiger in third person with humorous effect.

“When Tiger (Patrick) was a kid, his house was a block away from his school, two blocks from the public library, and three blocks from the county jail from which infamous gangster John Dillinger once escaped. (This happened before Tiger was born. Nothing exciting ever happened in his hometown again.)

“Tiger checked out lots of books from the school library and the public library, although he only finished the ones he couldn’t stop reading,” Jennings wrote. “Now he writes books he hopes kids won’t stop reading.”

It took Jennings a while to reach the author stage.

He worked in record shops all through college, then taught preschool and worked in a public library. The idea to write a children’s book struck him out of the blue about 30 years ago.

“I always loved stories, especially funny ones, and I always loved language and writing, but it wasn’t until I came across a copy of ‘James and the Giant Peach’ in a doctor’s office waiting room that I decided, on the spot, to write funny stories for kids,” he said.

Clever wordplay makes Jennings laugh and it works its way into his stories and titles (“Hissy Fitz” is the story of an irritated housecat whose owners’ last name is Fitz).

“The more inventive and surprising (the wordplay) the better,” Jennings said. “This is one of my favorites, written by Groucho Marx: ‘Time flies like an arrow. Fruit flies like a banana.’ Ha ha ha ha! Still funny the 700th time!”

Jennings gets inside the head of each new character he creates in order to give the character some real depth.

“I interview them, I pepper them with questions and write down their answers,” Jennings said. “Then I follow them like a detective, watching what they do, trying to root out their secrets, their fears, their dreams, their idiosyncrasies. I write all that down, too.”

The Open Book author series is supported by the Sno-Isle Libraries Foundation.