If a wildfire ever threatens Snohomish County, it’s good to know that Granite Falls Library librarian Jannah Minnix is here to help. 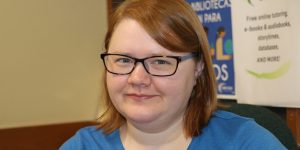 Minnix used her knowledge as a librarian and former 911 dispatcher to help her Northern California friends and neighbors deal with devastating wildfires in 2017 and 2018. The experience and the relationships Minnix made inspired her to collect fire survivors’ emotional stories and poignant artwork. She compiled them into “Awakening to Wildfire: Stories of the Mendocino-Lake Complex Fire,” which will be published in October.

At the time of those fires, Minnix was children’s librarian for the Mendocino County Library system’s Ukiah Library, 120 miles north of San Francisco along U.S. Highway 101.

In the early morning hours of Oct. 8, 2017, the Redwood Valley Fire started north of Ukiah. It merged with the Potter Valley Fire and others to become the Mendocino-Lake Complex. Eight people died in the fire, and one died later from severe burns. Fire consumed 36,523 acres and destroyed 546 houses and buildings, according to Cal Fire, California’s wildfire response agency. Thousands of residents were ordered to evacuate, including Minnix and her husband, Joey.

Minnix wasn’t home when the fire started. She was returning from a European book fair in Madrid to buy Spanish-language books for her library. During a four-hour layover in London, she checked her phone and saw a text message: “UPDATE ON REDWOOD VALLEY AND POTTER VALLEY FIRES—MANDATORY EVACUATIONS.”

Minnix confirmed the evacuation order with a library colleague and neighbor. When Joey didn’t respond to texts, she made a panicky phone call that he answered sleepily at 2 a.m. She told him he had to get out of the house. Now. 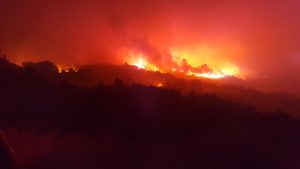 “We’d packed go-bags and taken photos of our belongings for insurance earlier in the summer during a previous fire scare, and between the two of us he was the ever-rational, level-headed one, so I knew he was as prepared as he was going to be,” Minnix writes in her book’s introduction. “I was forced to sit there, tell him I loved him, hang up and wait for the text that he’d made it somewhere safe.”

Joey soon confirmed that he arrived safely at his friend’s house in Ukiah, but Minnix said the 11-hour flight to Oakland was “agonizing.” She didn’t know if they still had a home. When Minnix got to Oakland, the shuttle to take her north to Santa Rosa wasn’t running. Fires were burning across Highway 101 in Santa Rosa and closed the airport where she’d parked her car. Phone lines and power lines were down. Joey told her to spend the night in Oakland.

On the trip to Ukiah the next day, Minnix said she was stunned by the devastation. She and Joey still had their house and were able to retrieve more belongings. They were allowed to return after one week.

As the Mendocino-Lake Complex fire raged, the Ukiah Library became the meeting place where the community could connect to the outside world, mourn, share losses and learn who was safe and how narrowly some escaped, Minnix said. She shifted into reference librarian mode and kept library customers up to date with information about the fire and evacuation orders.

Minnix was moved as she heard people’s stories and saw their reactions, their pain and trauma and raw emotions.

“Every time they told their stories, they said they felt a little bit better,” Minnix said. “But I was taken aback by how crazy some of the stories were. The guy who survived by covering himself in a creek. Families who had to run away on foot. There’s no way we can let those stories be forgotten.”

Minnix knew the importance of collecting and preserving this history. A binder collection didn’t seem right. She submitted stories to the California State Library for its “California Wildfires Story Project,” but those went into a much larger compilation of fires across the state. She wanted something just for Ukiah.

“I wanted a book to be personal for Redwood Valley and Potter Valley,” she said of the two Ukiah communities the Mendocino-Lake Complex fire hit hardest.

Despite the devastation around Ukiah, news crews focused their attention on Sonoma County. Three wildfires swept across 144,977 acres and destroyed vineyards and 7,111 houses and other buildings around Santa Rosa.

“One (San Francisco) broadcaster said our fire wasn’t worth the coverage,” Minnix said.

That lit a fire under Minnix, so to speak. She wrote a grant with the Community Foundation of Mendocino County to fund publication of a book on the Mendocino-Lake Complex fire. The Redwood Valley and Santa Rosa Community Recovery Fund approved it.

In July 2018, Minnix spread word around Ukiah to gather stories, photos and artwork of how the community experienced the Mendocino-Lake Complex fire.

Two weeks later, the Ranch Fire started northeast of Ukiah, just east of where the Mendocino-Lake Complex fires erupted in 2017. That blaze grew to become the Mendocino Complex and scorched 410,203 acres. It became California’s largest-ever wildfire. One person died, three were injured and 280 structures were destroyed, according to Cal Fire.

Minnix volunteered at the Cal Fire incident command camp and combined her six years of 911 dispatch experience with her librarian skills. She worked phones to answer the public’s questions and media inquiries. She got current information to evacuees, checked and verified facts, and updated social media alerts and evacuation maps. She told evacuees what to do and how to preserve personal artifacts. She even did storytimes for children who were displaced so they could keep some semblance of normal amid chaos.

“Wanting to help people in an emergency is very close to my heart,” Minnix said.

Meantime, Minnix continued to compile narratives, poetry, prose and artwork for the book. She worked with a local therapist and used the “community resilience model” so that wildfire survivors wouldn’t relive their trauma when sharing their stories. For those survivors who couldn’t write their own stories, Ukiah-area journalists Carole Brodsky and Ree Slocum gently coaxed them with tact and empathy, Minnix said.

Two-hundred copies of “Awakening to Wildfire” will be printed in October, Minnix said. She self-published it through Cypress House with help from Friends of the Library, Ukiah Valley. The 178 pages cover personal narratives, poetry and prose, personal interviews, newspaper articles and a monologue script from seven survivors.

“I was an evacuee myself,” Minnix said. “That’s why I’m so passionate about the book and making sure it happened.”

The experience gave Minnix an appreciation of the power of community in small towns.

“I loved being able to work in rural Northern California in part because everyone knew and supported each other, and when the fire struck the strength in those community bonds really came through,” she said. “I came to Granite Falls because I wanted to continue working with rural communities and supporting those relationships.”

The experience also proved the power of libraries.

“During the fire, some of the libraries in our system were the only places in town with internet, so we became many customers’ sole connection to the rest of the world and source of entertainment,” Minnix said.

“In general, though, living in rural, remote places like Redwood Valley or Granite Falls, you might not have internet or TV at home so the library is your source for free WiFi, movies and books. As librarians, we have to make sure we’re doing what we can to break down barriers to access for customers, because you don’t know what their situation is like at home.”