If you didn’t get to learn about the mysteries of the stars and power of the Hubble Space Telescope in October, here’s good news. 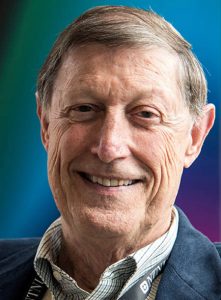 The Sno-Isle Libraries Foundation recorded Dr. Robert Williams’s Oct. 16 discussion for the Trudy Sundberg Lecture Series and will post the video on Nov. 16.

Williams is astronomer emeritus at the Space Telescope Science Institute in Baltimore, Md., where he served as director from 1993-1998. He devoted much of his time on the Hubble Space Telescope to the landmark Hubble Deep Field project, which revealed in remarkable detail the structure of galaxies in the early universe.

“We get to look into the past, which only astronomy can do,” Williams told the Trudy Sundberg Lecture Series committee.

Williams’s research interests as a spectroscopist have focused on the analysis of spectra of different types of emission-line objects, including nebulae, accretion disks, active galaxies and novae, in order to determine their physical conditions and evolutionary state.

“Unraveling the complex nature of the nova outburst through study of their ejecta has especially preoccupied me,” Williams wrote on his website. “I expect to continue working on novae for the next few years, both observationally and theoretically. Having had a close association with Hubble Space Telescope for many years a fraction of my time is devoted to giving lectures to research astronomers, students and the public on the discoveries that have come out of the Hubble Telescope.”