Sno-Isle Libraries customers now have the option to pick up holds whenever they want, 24 hours a day, using secure Express Lockers at the Monroe and Camano Island community libraries. 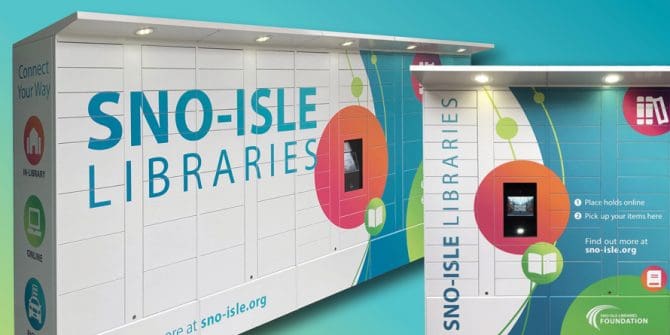 “We understand that circumstances can make it difficult for some customers to borrow physical materials given people’s busy schedules and their reactions to the current coronavirus climate,” said Casey Gabehart, Information Technology Enterprise Systems Manager for Sno-Isle Libraries. “We believe that creating additional self-service opportunities to pick up physical materials will benefit existing customers and will attract new ones.”

If the Express Locker project works as well as the team hopes, it could lead to new service models for Sno-Isle Libraries.

“We also believe that the benefits of an Express Locker system will allow us continued flexibility to adapt to a changing library landscape,” said Nick Fuchs, Sno-Isle Libraries Acting Director of Technical Services. “This could include creating a presence in communities where we don’t have a library building or the existing library is not adequately sized.”

Monroe has 90 lockers and Camano Island has 34 lockers. The lockers are located at the front entries of each library.

“This is an important service for our community,” Monroe Library Manager Phil Spirito said.

Bella Richardson, 11, was the first customer to pick up holds from the Monroe Library Express Lockers. She and her mother said they plan to use the lockers for those busy days when they can't get to the library before it closes.

"I like having these lockers because all you have to do is press the button and 'Pop!' It's open," Bella said.

Express Lockers were just as well received at the Camano Island Library.

“The staff here is so excited to offer these lockers,” Camano Island Library Manager Kelli Bragg said as she watched the installation.

"I will because there've been many times that I don't want to make a trip down here (to the library), but I could do it on the way home from something else when the library is already closed," Lewis said. "This will be really convenient for me."

Watch the Sno-Isle Libraries YouTube channel to see the ribbon-cutting ceremonies for the Monroe Express Lockers and the Camano Island Express Lockers.