Meet one of the hottest authors in the world as Sno-Isle Libraries welcomes Imbolo Mbue to the Open Book author series. 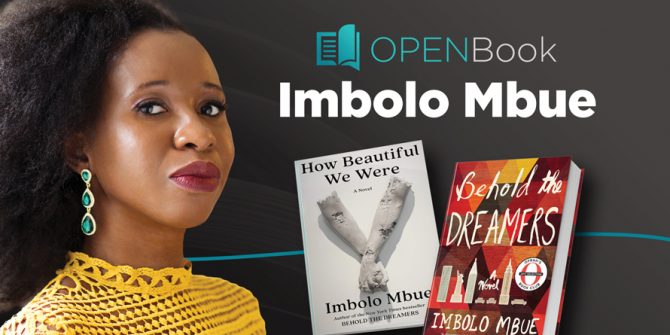 Interviewing Mbue could be an Open Book guest in her own right. Maya Sharma, a junior at Eastside Preparatory School in Kirkland, interviewed 25 prominent women leaders and wrote the acclaimed “Paving: Conversations with Incredible Women Who Are Shaping Our World” that was published in January.

Registration is open now for this online Zoom webinar, which starts at 2 p.m. Tuesday, April 13.

Mbue is the author of the 2016 New York Times bestseller “Behold the Dreamers,” which won the PEN/Faulkner Award for Fiction and was an Oprah’s Book Club selection. The novel has been translated into 11 languages, adapted into an opera and a stage play, and optioned for a miniseries.

Mbue developed “Behold the Dreamers” based on her own experience of being an African immigrant and the experiences of immigrants from around the world who shared their stories with her. The book’s main characters, Cameroonian immigrants Jendi and Neni, think they’ve found their way to the American Dream. Then, they find themselves caught in the 2007 U.S. mortgage lending scandal that brought down Wall Street trading house Lehman Brothers and severely damaged the U.S. economy.

Like her characters, Mbue grew up in Limbe, Cameroon, before emigrating to the U.S. in 1998. She lives in New York City and holds a bachelor’s degree from Rutgers University and a master’s degree from Columbia University.

Mbue’s new novel, “How Beautiful We Were,” is a sweeping, wrenching story. It was named one of Time magazine’s Most Anticipated Books of 2021. Set in the fictional African village of Kosawa, it tells of a people living in fear amid environmental degradation wrought by an American oil company. Pipeline spills have ruined farmlands. Children drink toxic water and die. Promises of cleanup and financial reparations to villagers go unfulfilled. The country’s government won’t help.

“How Beautiful We Were” explores the intersection of reckless capitalism, the remnants of colonialism and the price a young woman is willing to pay to keep her community’s ancestral land.

The Open Book online author series is supported by the Sno-Isle Libraries Foundation.