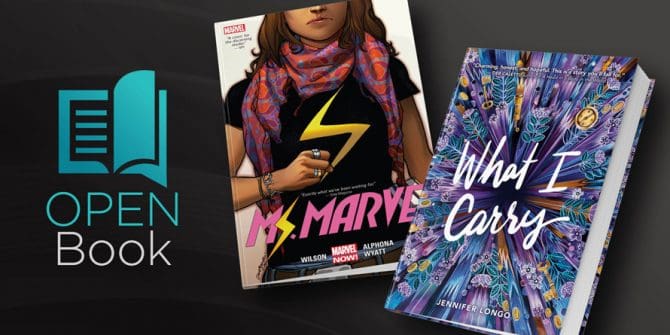 Longo is up first with a virtual visit to Sno-Isle Libraries at 4 p.m. Thursday, Dec. 2. Please register in advance for this Zoom webinar.

“What I Carry” tells the story of Muir, who has learned to avoid attachment to both people and possessions through a lifetime of foster care. With just one year left before emancipation from the foster care system, Muir finds herself in a new placement surrounded by people who challenge her philosophy and change everything.

Longo holds a Bachelor of Arts in Acting from San Francisco State University and a Master of Fine Arts in Writing for Theatre from Humboldt State University. She lives in the Pacific Northwest and spends her time consumed by writing, running, and walking her dogs. She chats with her daughter about great BIPOC woman authors on the podcast Damned Scribbling Women, and she’s reading her way down her ridiculously long holds list at the library.

Wilson closes out the Open Book author series at 6:30 p.m. Tuesday, Dec. 7. Please register in advance for this Zoom webinar.

Wilson is the author of the acclaimed novel “The Bird King” (2019), co-creator of the Hugo Award-winning and American Book Award-winning series “Ms. Marvel” (2013-2018). She has written for some of the world’s best-known superhero comic book series, including “The X-Men,” “Superman,” and “Wonder Woman.”

Her first novel, “Alif the Unseen,” won the 2013 World Fantasy Award for Best Novel. In 2015, she won the Graphic Literature Innovator Prize at the PEN America Literary Awards. Her work has been translated into more than a dozen languages. She lives in Seattle.

Longo’s and Wilson’s events will be recorded for later viewing on the Sno-Isle Libraries YouTube channel.

Previous
We welcome your respectful and on-topic comments and questions in this limited public forum. To find out more, please see Appropriate Use When Posting Content. Community-contributed content represents the views of the user, not those of Sno-Isle Libraries