Omar El Akkad has traveled far and wide in his life, first as a child, then as a student, then as a journalist. 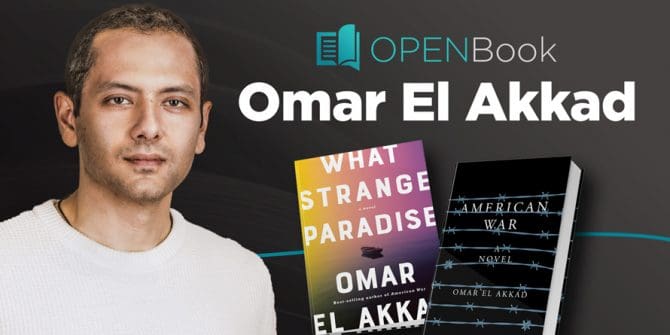 Now the bestselling author of “American War” and “What Strange Paradise” will talk about how a lifetime of travel inspired his storytelling as the next guest of Sno-Isle Libraries’ Open Book online author series at 3 p.m. Wednesday, Sept. 15. Please register in advance for this Zoom webinar.

This event will be recorded for later viewing on Sno-Isle Libraries’ YouTube channel and will be available indefinitely.

El Akkad was born in Egypt. As a young child, his father took a job in Libya. The move didn’t happen because of a government watchlist mix up at the airport. The family later moved to Qatar, then to Canada when he was a teenager.

El Akkad entered journalism after college more by accident than by choice. His start as reporter coincided with the start of the “war on terror.” He reported from Afghanistan and Guantanamo Bay, Cuba, and other global hotspots for a decade. His work earned a National Newspaper Award for investigative journalism and the Goff Penny Award for young journalists.

Now El Akkad lives in Oregon with his wife and children.

What originally attracted you to writing?

Having left my home country at the age of 5, and moved around the world a few times since then, I’ve always had a somewhat unsatisfactory answer to the question, “Where are you from?” So perhaps not surprisingly, I gravitated from a young age toward fiction, that place where one is free to contort the borders of time and place in whatever way is necessary. I wrote my first short story sometime around the first or second grade and it marked, I think, the first time I ever felt truly comfortable in my own skin, truly at home.

How did you transition from journalism to fiction?

Fiction came long before journalism, but journalism afforded me a profession. I came out of university with a barely earned computer science degree and no real job prospects (I’d spent all my time in college writing for various student publications, and as a result was completely dismal at all things related to my degree). Fortunately, I landed an internship at a daily newspaper the summer after graduation, and I stayed there for the next ten years. But during that decade, I still gravitated toward my first love – I wrote three novels in my spare time while working as a journalist, writing mostly after midnight and on the weekends. I never tried to publish any of them, and then I wrote a fourth one, “American War,” which I also never intended to publish. Then I had a bad day at work, and in a moment of impulse I sent the manuscript to an agent. Three months later, we’d sold it to Knopf.

How much of your own life experience influences your fiction work? (Thinking of how your family nearly moved to Libya, if not for a hiccup at the airport.)

I steal from my own life as liberally as I steal from everyone else’s. Thematically, I write almost exclusively about unrooted people – people who are unable to point to a single place or community or culture and say: “This is mine.” Of course, a lot of that is projection. Then there’s myriad details of place and people that are imported from my own experiences – for example, all the details of Egypt in “What Strange Paradise” are distortions of my own memories of that country.

Did you expect “American War” to be so eerily prescient of the current state of American politics?

I didn’t even think “American War” would ever get published. I wrote it without the benefit of an agent or publisher or book deal; I wrote entirely just for myself. And when it did sell, I thought it would be read the way I intended – as an inversion of power and privilege in the context of the neoliberal war on terror years. Instead it ends up coming out four months into the Trump administration, and suddenly it is read overwhelmingly as a kind of prophecy of where this country is headed. To say I never intended that would be an understatement.

What does “What Strange Paradise” say about the refugee crisis? How do we help people gain a better life without risking death?

In my mind, “What Strange Paradise” is a novel oriented against the privilege of instantaneous forgetting – the privilege of being momentarily outraged at one injustice and then, the next day, moving on to the next one. We are, by virtue of what we have allowed our societies to become and our ruling class to get away with, creating wave after wave of refugees. These are people whose homes have been rendered uninhabitable by war or poverty or – and this will be especially true in the coming decades – climate change. Affording them safe passage and safe harbor is not a matter of charity, it is an obligation. “What Strange Paradise” takes place at the intersection of the world as it should be and the world as it is; I hope readers take from it a sense that what we do to the most vulnerable among us is, inevitably, what we end up doing to ourselves.

What do you suggest your fans read while they wait for your next book?

I’m a huge fan of Basma Abdel Aziz, the fearless Egyptian writer whose novels have caused her no end of grief from local authorities back home. Her new novel, “Here is a Body,” comes out next month in English translation. If you’re looking for something dystopian, “Moon Of the Crusted Snow” by Waubgeshig Rice is a great book that hasn’t gotten as much attention in the U.S. as I think it should have. Outside of books, two of the best narrative storytelling experiences I’ve had in recent years were video games. The first is “Return of the Obra Dinn,” a game where you play an insurance company investigator trying to piece together how everyone on a doomed merchant ship died. The second is “Outer Wilds,” a space exploration game with one of the best and most detailed backstories I’ve seen in years (though not for the easily nauseous – you spend a lot of time orbiting things in a tiny ship).

Who or what inspires you?

My children, and their indestructible commitment to joy. Art, especially art that strikes at the heart of power.