It was out of the ordinary since the library is open to customers. No one needs to knock to enter. 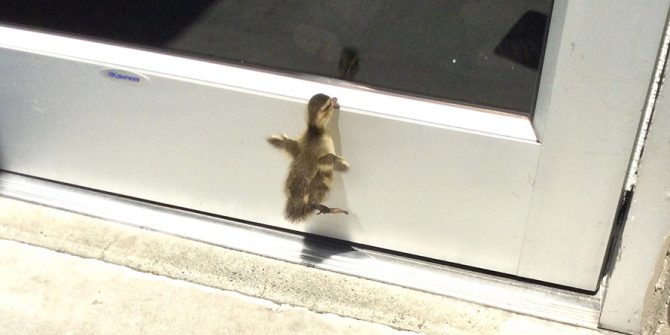 Moodie and her co-worker Vicky Beatty investigated and found a duckling desperately tapping its beak on the door frame and window.

The little ducky and its Mallard mama, standing nearby, were looking for help.

Moodie and Beatty found the cause of the ducks’ distress. At least eight ducklings were trapped in the access well that houses ventilation pipes and leads to the library’s crawl space, Library Manager Charles Pratt said. Beatty said she saw a second female Mallard scurrying for her offspring.

“Marlene went outside and scooped the ducks out of the hole, but they went running in several different directions,” Pratt said. “The mama duck pursued some, but she wasn’t able to round them all up apparently, because Marlene returned to the area later to check and several of the ducklings had made it back into the same spot and became trapped again.”

Only this time, there was no sign of either mama Mallard to corral her kin.

The Stanwood Library isn’t near any large body of water that a duck would call home. Pratt figured the duck and her family must really be lost. And amid all this duck drama, Pratt had a couple of one-on-one staff meetings.

“The only place where there is even a little water is a big ditch line and drainage area behind the nearby middle school between it and Heritage Park, so my staff and I turned our one-on-ones into walking meetings where we talked and walked around the park to look for the mama, but we never saw the mama duck again after Marlene first helped her.”

Meanwhile, Moodie scooped the four ducklings out from the crawlspace access well and took them to Sarvey Wildlife Care Center in Arlington.

After Moodie left, Beatty heard “peep, peep, peep” coming from the air vent near her desk.

“We went outside to check the crawlspace, where you could definitely hear it coming from under the building,” Pratt said.

He called Eric Hentilla at the City of Stanwood. One member of Hentilla’s two-man crew crawled under the building and patiently rescued two more ducklings using a net.

“I scooped the last two up and put them in a box,” Pratt said. “It was the end of my day by this point and my wife and daughter came to pick me up, so the three of us made a second trip out to Sarvey to deliver the last two ducklings.”

After a week, Pratt checked in to see how the six distressed ducklings were doing.

All was well. They are healthy and recovering in the waterfowl nursery.

“They will be with us for a few more weeks until they are released onto the pond we have on our property,” Jesse Murch of Sarvey Wildlife Care Center told Pratt by email. “They will stay there until they can fly away and migrate on their own.”

Pratt was grateful for the city’s speedy response and the care its employees showed.

“Our partners from the city were super quick to respond and stuck with it through several failed attempts to grab the little ducks before finally being successful,” Pratt said. “They did a great job saving the last two.”

Pratt also expressed his appreciation to his staff.

“Thanks to all of you for being such caring and compassionate folks. Y’all are a bunch of ‘good eggs.’”