Do you remember where you were when Mount St. Helens had its cataclysmic eruption on May 18, 1980? 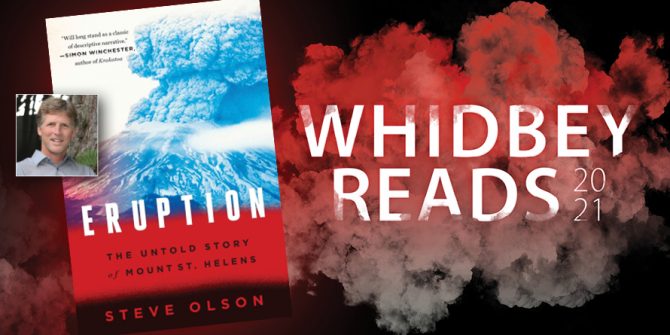 Steve Olson takes you back to that fateful date in Washington state’s violent volcanic history. Olson and his book, “Eruption: The Untold Story of Mount St. Helens,” headline Whidbey Reads 2021.

Whidbey Reads is an annual community-wide reading program funded by Friends of the Library groups for the Clinton, Coupeville, Freeland, Langley and Oak Harbor libraries. The initiative brings readers together during several events to read and consider one book, generating discussion and exploring the title’s themes.  Since all Whidbey Reads programs are online this year, anyone who is interested can participate, regardless of geographic location.

For “Eruption,” the story starts more than 40 years ago.

On March 27, 1980, Mount St. Helens had its first eruption in more than 100 years. In the weeks that followed, the mountain rumbled with numerous earthquakes, pyroclastic flows and eruptions that disrupted commercial air traffic and caused evacuations. It was a captivating daily news story for Pacific Northwesterners.

Byars, a librarian in Oak Harbor, remembers that day vividly.

“The morning Mount St. Helens erupted, I was at home wondering why the windows in our house were rattling so violently,” she said. “Whether you lived in the area during the eruption or not, chances are you’re still fascinated by the event and its aftermath.”

He grew up in Othello, in Eastern Washington. He’d been back east for a couple of years attending Yale University when Mount St. Helens erupted.

After college, Olson moved to Washington, D.C., and became a successful freelance writer.

Olson and his wife returned to the northwest in 2009 and settled in Seattle. He said he wanted to write about the state he always called home. The memory of Mount St. Helens had stuck with him, so he started working on “Eruption.”

The day of the eruption, winds blew an estimated 520 million tons of ash eastward across the country, according to the U.S. Geological Survey. Spokane, 250 miles east of the volcano, fell into complete darkness as the ash plume covered the city. Major ash falls occurred as far away as central Montana, and ash fell visibly as far as 900 miles to the east. The ash cloud spread across the U.S. in three days and circled the Earth in 15 days.

“The 1980 eruption of Mount St. Helens was easily the most dramatic thing that has ever happened in Washington state,” Olson said. “I read the other books that had been written about the event and decided that there was room for another.”

“Eruption” focuses on the state of the state circa 1980. Olson considers the outsized influence of the Weyerhaeuser Co. on state politics and policies, the fate of the 57 people who were killed by the eruption, and the political wrangling that followed on what to do with the 230 square miles of devastated land.

Olson published his first book in 2002. “Mapping Human History: Genes, Race, and Our Common Origins,” was nominated for the National Book Award. He followed up with “Count Down: Six Kids Vie for Glory at the World’s Toughest Mathematics Competition,” “Anarchy Evolution: Faith, Science, and Bad Religion in a World Without God” with Greg Grafin, “Eruption,” and his latest, “The Apocalypse Factory: Plutonium and the Making of the Atomic Age.”

“By the way, the second most dramatic thing that has ever happened in the state, in my opinion, is the production of plutonium at the Hanford Nuclear Reservation during World War II and the Cold War,” Olson said. “’The Apocalypse Factory: Plutonium and the Making of the Atomic Age,’ tells that story.”

Olson is happy for the honor to be the headliner for Whidbey Reads 2021.

“I couldn’t be more thrilled. My wife and I love Whidbey Island and spend as much time there as possible,” Olson said. “We’ve hiked the Ebey Landing Trail more than any other trail in the state. And when we do, a meal of mussels in Coupeville is our almost-inevitable reward.”

The Whidbey Reads committee is hard at work gathering presenters for supporting programs, all of which lead up to an opportunity to hear directly from author Steve Olson on Thursday April 29 at 6:30 p.m., Byars said. All upcoming Whidbey Reads programs will be listed online at sno-isle.org/whidbeyreads.

“Keep a weather eye on the horizon for a variety of Whidbey Reads programs and book discussions,” she said.