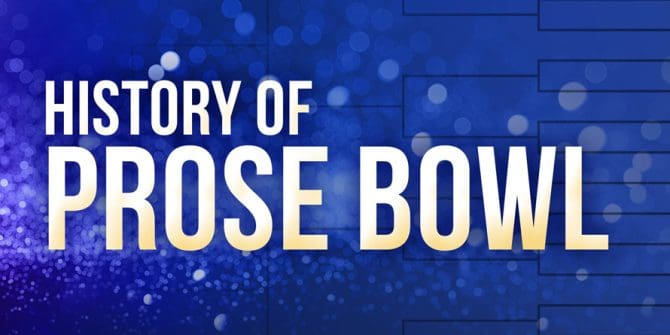 Since 2015 Sno-Isle Libraries has offered a fun way for customers to determine which one book was the previous year’s favorite: Prose Bowl! The bracket-style contest, a la March Madness, pits the most popular titles against each other in a contest where the winner is decided by you. Join us for a walk down Prose Bowl memory lane and make sure to vote in this year's thrilling bookish brawl.

The inaugural contest included 32 titles and 4 rounds of voting. The winner was The Girl on the Train by Paula Hawkins. It received serious competition from The Nightingale by Kristin Hannah.

This year the list of contenders included just 16 titles and 4 rounds of play. The winner was The Underground Railroad by Colson Whitehead, beating out When Breath Becomes Air by Paul Kalanithi in the final round.

The list of contenders expanded to 24 titles which battled it out over just 3 rounds of play.  2018 was the first year in which titles were categorized by genres and the genre face-off was introduced. While Small Great Things by Jodi Picoult and The Bear and the Nightingale by Katherine Arden made valiant efforts, they were nosed out by the winner, Glass Houses by Louise Penny.

We learned from the 2018 contest that readers wanted more books and more opportunities to play, so we increased the title list to 60 and returned to 4 rounds of play. For the first time in the history of Prose Bowl, readers selected a nonfiction title, Becoming by Michelle Obama. It sailed to victory against two literary heavy-hitters, Kingdom of the Blind by Louise Penny and Of Blood and Bone by Nora Roberts.

We really upped the ante with our 2020 contest, bringing you 80 titles competing in 8 genres across 4 rounds. They Called Us Enemy by George Takei nearly won, but was edged out by A Better Man by Louise Penny.

80 titles across 8 genres competed for your votes for 4 rounds. In the end, A Promised Land by Barack Obama took the crown. Its most serious challenger was The Midnight Library by Matt Haig.