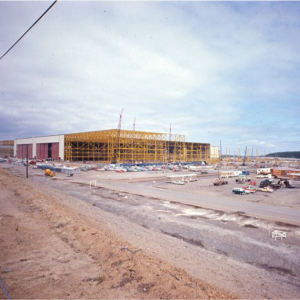 In 1966, the Boeing Company purchased 780 acres of land next to Paine Field in Everett.

By 1967, a new Boeing factory had been built which to this day remains the largest building in the world by volume.

You may have heard the myth that it rains inside the factory. Not quite - but early on the heat created by the manufacturing process meeting the regular air did result in small clouds forming near the ceiling!

An air circulation system was installed and kept the 'indoor weather' under control. On September 30, 1968 the first completed 747 jumbo jet was rolled out, suitably named the 'City of Everett'.