In the early morning hours of May 30, 1911, fire broke out in the business district of the town of Snohomish. By the time the flames were extinguished, 2 blocks – over 30 businesses and all of their contents – had been destroyed.

The Milwaukee Railroad suffered as well, as the fire severely damaged work on a nearby railroad trestle.

Like many early towns, Snohomish was built primarily of wood, allowing the fire to move very from building to building. However, the lack of wind that day and the three-story brick Schott Building did their part to help the volunteer fire department stop the fire from moving farther west.

Despite the devastating loss of property, there were no deaths reported. The work of rebuilding began almost immediately.

With the lesson learned from this fire as well as from the Great Seattle Fire in 1889, the destroyed frame buildings were replaced by those made of brick. 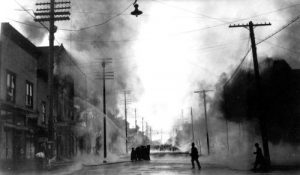 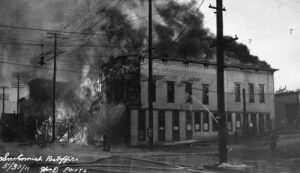