Pilot Fred J. Wiseman and his Curtiss-Wright-Farman biplane visited the town of Snohomish on May 7, 1911 and demonstrated the first powered flight seen in the county.

With the ability to travel 70 mph, the plane was touted as the 'fastest machine in the world'. Which may have been true, but not exactly what the Snohomish spectators witnessed.

The plane itself arrived in pieces by train and had to be assembled before the flight. It ended up in a different kind of pieces when, after less than a minute in the air (and only 60 feet of elevation), the engine failed. The plane landed nose down in a field. Wiseman survived uninjured, but it's said that pieces of the broken plane were taken as souvenirs by some of the crowd.

Regardless, the event was indeed unique for Snohomish County and provided a remarkable first glimpse into the beginnings of aviation. 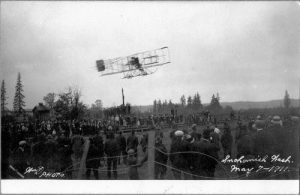 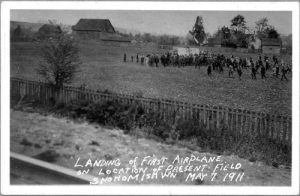