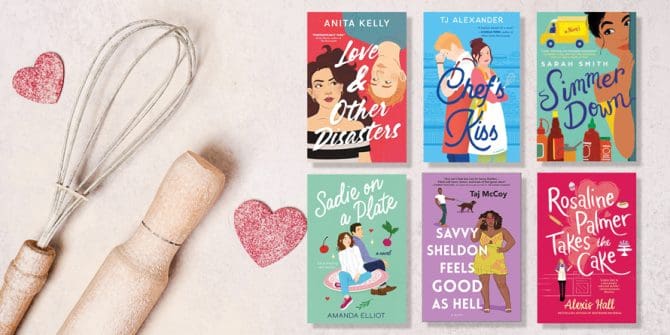 What could be better than a charming baking show or a captivating romance story? How about a book that combines the best of both? From food trucks to baking competitions to cooking magazines, these books take the trappings of the culinary world and add in a little (or a lot of) romance to make things extra sweet.

Pastry chef Simone is alarmed when the editor of the high-end culinary magazine for which she develops recipes tells her that they're pivoting to video. However, her dismay at this change is soon overshadowed by her growing attraction to the new kitchen manager, Ray. Simone and Ray's relationship grows closer when Ray comes out as non-binary at work and Simone realizes that her dream job might not be so perfect after all.

After quitting her day job to work at her mother's food truck, Nikki finds that competitor Callum has set up his own truck right next to her highly desirable parking spot. With customers flocking to Callum's truck, Nikki and Callum decide that the winner of the Maui Food Festival will get to keep the coveted spot. If only sparks weren't flying between the unlikely pair...

Sadie on A Plate

Sparks fly between up-and-coming chef Sadie and her seatmate, Luke, during a flight to New York. The only trouble is, Sadie is on her way to compete in a top secret cooking contest. After a magical evening together, Sadie discovers that Luke is none other than a judge on the show that could make or break her career.

After a bad breakup from a boyfriend who wanted an "upgrade", Savvy Sheldon decides to improve her life. Her plan includes finally renovating the kitchen where her beloved grandmother taught her to cook. Naturally, this renovation brings a new love interest into Savvy's life: a handsome contractor named Spencer.

Opposites attract when exuberant amateur chef Dahlia decides to compete in a reality TV cooking competition, where she meets the taciturn (and irresistable) London, the show's first non-binary contestant.

While competing on a popular baking show, Rosaline finds herself drawn to fellow contestants Alain and Harry. She must decide which new love interest is right for her while also vying to win this life changing competition.