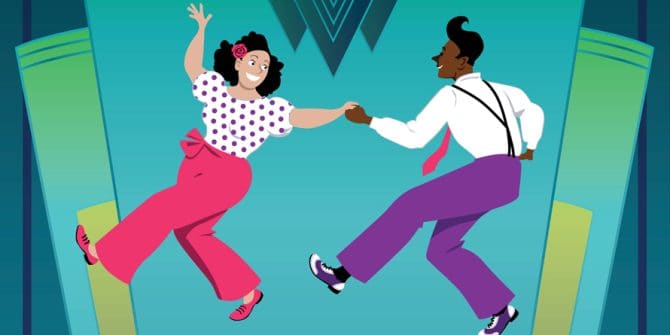 May 26 is World Lindy Hop Day! Lindy hop is a partner dance done to big band swing music that originated in Harlem in the 1920s. It came from the dance floor of the Savoy Ballroom, the only de-segregated club in Harlem, and is still beloved by dancers all over the world. World Lindy Hop Day is celebrated on May 26 to honor the birthday of one of the original Savoy Ballroom dancers, Frankie Manning. Frankie is considered the king of lindy hop, and his birthday is celebrated globally in the dance community. Learn all about the happiest dance in the world with these books and movies!

Author and accomplished dancer Scott Cupit takes the reader through the history of swing dancing, how to dress the part, and the basic steps for several different styles of swing dance. He also includes first-hand experiences and conversations with the stars of the lindy hop world, such as Frankie Manning.

This documentary follows the journey of several different lindy hoppers from all over the world and shows how lindy hop went from a social dance in Harlem to the global phenomenon it is today. It includes interviews with legends such as Frankie, Norma Miller, and Jean Veloz, as well as modern teachers, dances, and competitors.

Stompin' at the Savoy

Norma Miller’s name is often spoken in the breath as Frankie Manning’s, and is known as the Queen of Swing. This vividly illustrated book shows her journey as a pre-teen who loved to dance to one of the most widely respected dancers in the world. Norma taught and danced until her death in 2019, at the age of 99 years old.

When the popularity of lindy hop experienced a resurgence in the 1990s, credit was given to a few things; a Gap commercial for khakis, the movie Swingers, and this movie! Starring a young Christian Bale and set in World War II, the contrast of the heavy emotions and joyous dancing made this movie a hit, and helped spur a renewed interest in big band music and swing dancing.

Stompin' at the Savoy

Chick Webb provided the soundtrack for the Savoy Ballroom, and lindy hop wouldn’t be what it is now without his influence. Chick not only set the foundation for the standards of swing and jazz, but he also gave a teenaged Ella Fitzgerald her big break!