Art Spencer and his dog "Teddy" in front of his machine shop circa 1942.

The Spencers bought land on the southwest shore of Holmes Harbor, just beyond the western boundary of the plat owned by the socialist Freeland colony. Hudson and Sarah opened the Harbor Cash Store, which competed with the Freeland cooperative store (formally called the Free Land Association Mercantile Department) near the base of the bluff to the east. Next door to the Harbor Cash Store they put up a two-story dwelling, the ground floor of which was used for dances and community meetings. The store was later moved onto pilings and the dwelling remodeled into a large residence that over the years housed various members of the Spencer family. Well more than 100 years after Hudson and Sarah Spencer arrived at Freeland, some of their descendants still lived on Whidbey Island.

The Spencers branched out into other enterprises, including a dock, a logging operation, a sawmill, and a log-peeling factory that shipped its output to Mexico. In 1916 Arthur Spencer began operating Rover, a 55-foot motor vessel that made regular runs between Whidbey, Camano Island, and Everett. He also built a machine shop and living quarters on pilings next to the Spencer store, moving it across the road to dry land in 1939. This photo was taken shortly after the move, in 1942.

Art died in 1954. This building was bought by Frank Nichols in 1964, who started Nichols Brothers Boat Works. The machine shop proper was eventually demolished, but the facade of the machine shop was retained as the Boat Works grew. Though the gas pumps are long gone, the front of the building is still visible today! 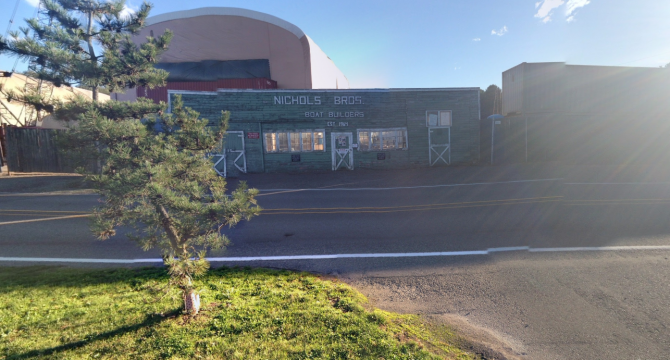