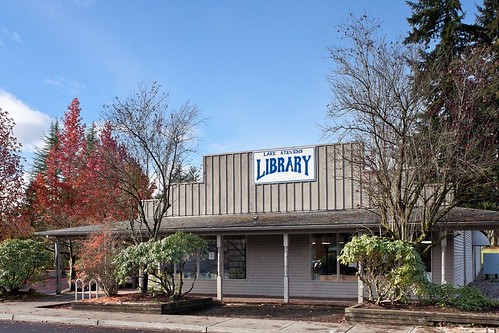 The Lake Stevens Library has had many homes over the last 75 years! From humble beginnings to the promise of the future, Lake Stevens residents have loved their library.

1949 - 1963
The library moves into the old post office which was next to Vi’s Snack Corner on 20th and Main Street. With only one door and one window and a creek running underneath it was quite a chilly place to work and read.

1963 - 1985
The old post office became the Lake Stevens Library. When the library first opened it was open for only 15 hours a week and deliveries of new and requested items came only once every other week. Around this same time, Snohomish and Island County libraries joined together creating Sno-Isle Libraries (1962).

1985
The library moved into the Town Pharmacy building at 1804 Main Street and this is where our library has been ever since.

2008
Residents of Lake Stevens voted to join Sno-Isle Libraries. Under this new arrangement, the City of Lake Stevens was still responsible for providing the library building, while Sno-Isle continued to provide the library collection and other services. The library was remodeled in 2012.

2021 (exact timing TBD)
The library will move into the building that had previously been a police station at 2211 Grade Road! The former Town Pharmacy and Museum building will be torn down to expand North Cove Park and further develop downtown Lake Stevens.