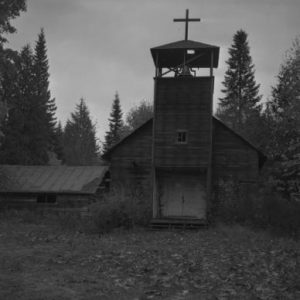 The Shaker Church was built in 1924 on the Tulalip Reservation by members of the influential Indian Shaker Church, a Christian church founded by John Slocum in 1882. Indian Shakerism began in Puget Sound and spread throughout the Pacific Northwest as far south as Northern California and as far north as British Columbia.

The picture, a negative of a photograph, was taken in 1951 or 1952. When the church was placed on the National Register of Historic Places in 1976, it was one of the best-preserved buildings built by the Shakers.

By 2008, the church had deteriorated beyond the point of repair. The Tulalip Tribes government stepped in and funded rebuilding it. Below is a photo of the church today.

The Indian Shaker Church has been described as a relatively new and distinct Christian denomination that demonstrates a mixture of Native American traditional beliefs and customs with some Catholic and Protestant influences. Indian Shakers are unrelated to the Euro-American Shakers or United Society of Believers.

In their book, John Slocum and the Indian Shaker Church, published in 1996, authors Robert H. Ruby and John A. Brown describe Slocum's conversion after a logging accident in 1882. Slocum, a Squazin tribe member, had a near-death experience and believed God returned him to preach Christianity.

A year later, Slocum fell ill again and was believed dead. His wife and co-founder of Shakerism Mary Thompson shook as she prayed her husband back to life. Shaking as a means of healing became central to the Church's practice.

According to Ruby and Brown, Johnny Steve and his wife introduced Shakerism to the Tulalip Reservation in 1896. The Indian Shaker Church at Tulalip is still in use today.