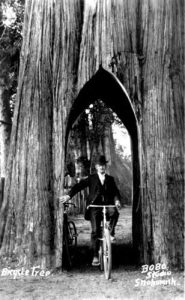 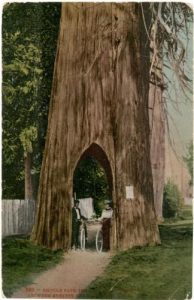 Many people are familiar with the images of huge Redwood trees in Northern California, hollowed out so that cars could drive right through them. Did you know that in the 1890s, Snohomish was home to an earlier version of this same attraction, but designed for bicycles?

Civil War veteran Davis "Lew" Paramore was a local Snohomish druggist and president of the Snohomish Bicycle Club in the 1890s. After farmer Abel Johnson donated the piece of real estate with the large cedar tree and the cinder bicycle path to the club, Paramore hired a logger to cut the pathway through the tree. The resulting passage was 5 feet wide and 12 feet high, and the work cost $15.

Cycling was extremely popular at the time, and the bicycle tree became an instant destination for many clubs and groups. Everyone had their photo taken in front of the tree, and many postcards featured it as well.  Even as the cycling boom faded in the early 1900s and later visitors mostly arrived by automobile, the tree remained a local landmark for many years afterward.

The tree was struck and damaged by lightning in 1913, and then undermined by the flooding of the nearby Snohomish River. It finally toppled over at around 3:00pm on December 2, 1927, cracking the pavement of the road as it fell. Local newspapers wrote articles marking its passing, and a movement was started to carve out another tree to replace it. 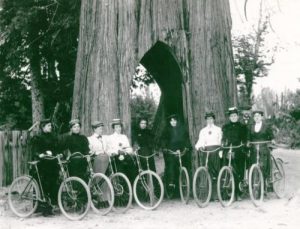 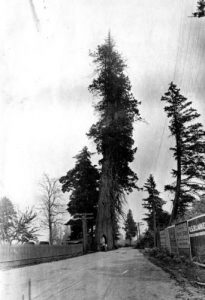